Alastair Cook warmed up to the job of being English captain as he scored a marathon century to put England in a position of strength. He was well supported by Pietersen who was unlucky to be dismissed on 99. England at the close of play had scored a massive 374 for the loss of three wickets. 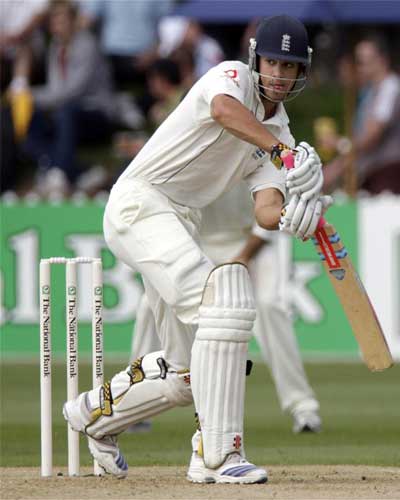 Bangladeshi skipper Shakib had surprised many by electing to field first on a track that seemed like a batting paradise. The decision betrayed the trust that Shakib lacked in his batting line-up as he feared the English bowlers taking advantage of the early morning moisture as his batsmen would have being exposed. But soon the keeper was taking the ball from the pacemen after the second bounce and it was evident that the support for the pacemen from the pitch was next to zero. Debutant MMichael Carberry and Cook waded into the Bangladeshi bowling attack as the runs came thick and fast. Carberry impressed one and whole with his sound technique and immaculate strokeplay against the pacemen.

Once the spinners were introduced Cook prospered while Carberry took the backseat. The southpaw lost his fluency against the spinners and his indecisiveness proved to be undoing. The openers added 72 in 18.2 overs before they were separated. Carberry (30, 51b, 5x4) went for an ill-advised sweep and was trapped leg-before by an accurate Mahmudullah. Cook was joined at the crease by Trott and the two went about grinding the Bangladeshi bowlers to dust. It finally took a dubious decision from umpire Tony Hill to remove Trott. Trott (39, 77b, 3x4) was forced into an evasive action by an accurate bouncer from Rubel Hossain and the ball lobbed off the helmet of the batsmen to the keeper. The bowler, keeper and the slip fielder appealed and the umpire upheld the appeal leaving Trott fuming.

Pietersen who was regarded as a walking wicket on this tour appeared bullish from ball number one. The right-hander changed his stance as he took guard outside the leg stump to prevent being opened by the left-arm spinners. The right-hander along with skipper Cook began to rip apart a tiring and listless Bangladeshi bowling attack. Pietersen in particular was in murderous mood as he found the ropes with alarming regularity. Cook soon crossed his Test century while a huge six and was looking good for more. The pair added 170 in 35.5 overs before Pietersen departed. The right-hander missed out on a well-deserved century as he was cleaned up on 99 by a sharp spinning delivery from Abdur Razzak. As Pietersen walked back to the pavilion he wore a shocked expression that did not change and only when he reached the boundary ropes did he raise his bat in acknowledgement.

Cook continued in ruthlessly manner and he found another able ally in Collingwood (32 batting, 40b, 5x4). The pair added unbeaten 55 in 14.2 overs and at the close of play England were placed comfortably at 374 for 3.