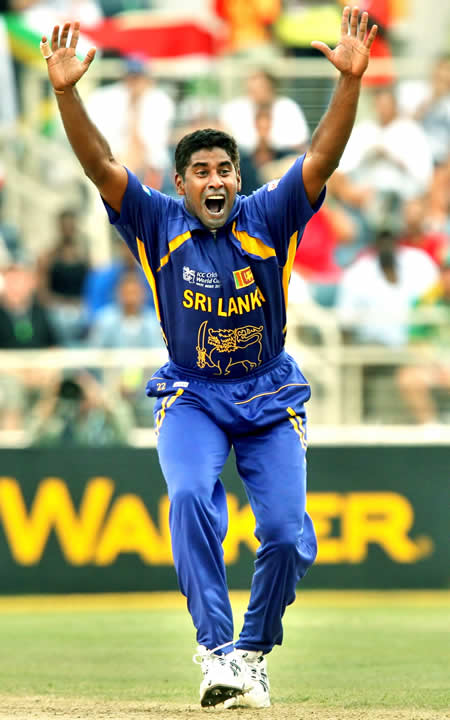 Old warhorse Chaminda Vaas produced a masterly spell at the beginning to snuff out the challenge of Chennai Super Kings after it was laid low by a typical brutal assault from Andrew Symonds. The double whammy was too much for Dhonis men who succumbed to a 31-run defeat to Deccan Chargers in the DFL IPL match here on Sunday night. Vaas conjured up another magic over to scalp both M Vijay and the dangerous Suresh Raina to derail Chennais chase. Bowling with good control and swing that had made him a dangerous bowler in the international cricket, Vaas literally killed the contest when he induced Mathew Hayden to top-edge a shot and was caught at short fine leg by RP Singh

On a pitch which offered some bite to the spinners, the Chargers frontline spinner Pragyan Ohja and part-timer Rohit Sharma had the batsman in a tangle. Ohja had Badrinath caught in the deep as Chennai sunk further. Dhoni and Justin Kemp threatened for a while hitting the occasional big shot but the run-rate was climbing up steadily. Jaskaran Singh felt the blunt as he was taken for 16 runs in his first over. However, Kemp (22) was dismissed trying to hit Ohja over the top and pressure was on Dhoni and Morkel to deliver.

Chargers bowlers were disciplined and were backed up by excellent work on the field. Dhoni and Morkel werent given any easy gifts and had to manufacture the bad deliveries by manipulating the line and length of the bowlers. After being carted for a six, Andrew Symonds had the last laugh producing a peach of a delivery to get rid of Dhoni (42). Morkel struck a few lusty blows in the end which entertained the crowd but his effort came a bit too late in the day.

Earlier, it was rude awakening for young Tygai as Adam Gilchrist smashed him for 18 runs to start the Deccan innings on a high note.Gilchrist relishing the width on offer was in a punishing mood as Deccan scored up 41 runs in the first three overrs. Sanity was restored when Dhoni was forced to turn to his spinners Muralitharan and Ravi Ashwin . Dhoni put down Laxman in Muralis opening over and Ashwin extracted bounce and turn in his first over. The tall spinner scalped Gilchrist who was bowled by a sharply turning delivery. There was more trouble in store for Deccan as Laxman was run-out by Suresh Raina. The innings went on to a tailspin as both Gibbs and Symonds eschewed risks to consolidate the innings. Symonds appeared to be rusty and could only score 3 runs off his first 17 deliveries.

Gibbs on the other hand was busy and kept the scoreboard moving with occasional big hits. Symonds finally threw caution to wind and smashed Balaji for a six and a four in latters second over to join the party. Mixing caution with aggression, the two added crucial 95 runs for the third wicket before a brilliant piece of fielding by Morkel off his own bowling ended the stand. Morkel stopped an Andrew Symonds push on his follow through and turned quickly to make a direct hit at the non-strikers end, catching Gibbs out of the crease.

Symonds completed his half-century but was run-out soon after it. But Dhoni and Chennai lost the plot when bowled a horrendous last over in which he gave 21 runs. In the end the total of 190 proved to be more than enough for Deccan Chargers.