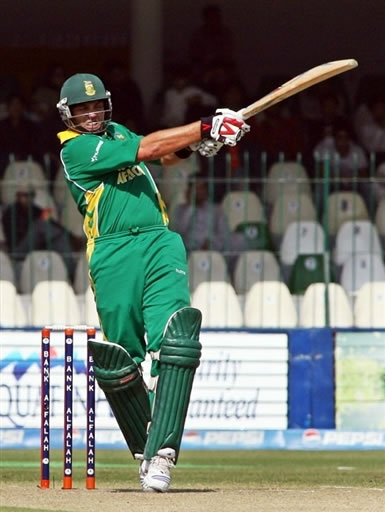 It was a clinical annihilation under lights at the Chinnaswamy stadium on Thursday night as Royal Challengers Bangalore crushed former champion Rajasthan Royals by 10 wickets in the DLF IPL 3 match.

Praveen Kumars hat-trick, the first in this years IPL, deflated the visitors which had made five changes in its line-up. Praveen moment of glory came in the 17th over when in his second spell he scalped rusty Damien Martyn, Sumit Narwal and Dogra with three different deliveries. Martyn yorked himself when he gave the bowler the charge; Narwal was surprised by a quick bouncer which the batsmen top-edged to be caught at third man and Dogra was undone by the best ball of the match which came in after pitching.

More than Praveens strike it was Bangalore surgical precision in reducing the inform batsmen Yusuf Pathan to scoreless wonder which stood out. Pathan was denied balls in his striking zone and was peppered with short balls. The batsmen took a few body blows, swished thin air and even mistimed the pull shot twice and survived two chances. He made an unconvincing 24 which included two sixes when the ball was full and in his striking zone but was finally run-out. Injuries and form related crisis forced Warne to make five changes. Opener Lumb appeared like a cat on a tin roof and struggled to force the ball off the square and denied the normally free stroking Naman Ojha the strike. Rajasthan fell behind the run-rate from the start and Kumble used his bowlers in short spells as they harried the batsmen with back of length stuff. Kallis prised out Naman Ojha with the short ball and Kumble foxed Lumb with a quicker delivery as the batsman gave him the charge. 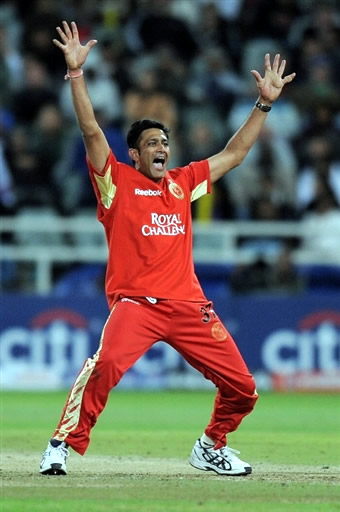 Last matchs batting hero, Jhunjhunwala also fell early chopping Kallis to his stumps and Rajasthan looked eagerly to Pathan to deliver the goods. Kumble brought in his quick men and rattled Pathanwith an assortment of bouncers and back of the length deliveries. Pathan looked lost and ungainly and with Martyn looking woefully out of touch, the game as fast slipping away from the Royals grasp. Pathan rode his luck but was run-out by a brilliant throw by Kohli. Praveen Kumar came back for his second spell and his hat-trick and Kumbles wickets brought a swift end to the Rajasthans innings.

Rajasthan needed wickets but Morkel and Munaf lacked discipline. Morkel striving for pace was all over the place and he drifted on to the pads quite frequently. Both Kallis and Pandey cashed on these gifts in style as Morkel was taken for 20 overs in his first over. The first two overs produced 32 runs and the 50 of the innings came in the fifth over and the contest was good as over. Warne brought himself on and earned respect from both batsmen. Narwals opening over went for 18 as Pandey helped himself to four and a six off consecutive deliveries. The hosts completed the formalities after the time-out. This is only the third 10-wicket win in the history of IPL and the defeat was the third consecutive one for Warne. Kallis for his all-round performance was chosen as the man-of-the match.